Chubu Electric is involved in the construction as well as the operation of Freeport LNG and this new vessel will engage in the transport of LNG from the project located in State of Texas in the United States.

"K" Line already executed previous long-term Time Charter contract for a vessel having identical specifications with Chubu Electric in April 2013, and this contract for second vessel is based on subsequent contract following that for the first vessel.

"K" Line is committed to continuing to contribute to, and help meet, expanding global needs of LNG transportation utilizing the best knowledge and network established during its more than 30 years of LNG transport business experience since delivery of S.S. "Bishu Maru" in 1983. Our goal is to simultaneously develop a more stable earnings structure adopted as part of our newly-reformed medium-term management plan "Bridge to the Future."

Main Particulars of the Vessel: 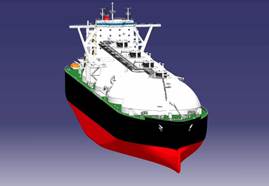 (*) Boil Off Rate (BOR)： Ratio of natural vaporized gas against maximum tank capacity to indicate capability of tank heat-insulation system. The vessel’s BOR 0.08% per day, improved twice as much from 0.15% of the conventional LNG carriers, is the lowest BOR among all LNG carriers in the world.