The Long Beach Board Port Authority announced top ocean carriers in compliance with its voluntary ship speed reduction program in designated offshore waters for the purpose of reducing exhaust gas from their vessels as "Green Flag" commendation ocean carriers in 2011. "K" Line received the prestigious Green Flag award from the Port Authority based on its total of 95 ships, representing 177 qualifying legs into and out of the port of Long Beach, meeting 100% compliance rate within 40 nautical miles from the port during 2011. The slowdown navigation is effective for reducing emissions of diesel particular matter (PM), sulfur oxides (SOx), nitrogen oxides (NOx) and greenhouse gases such as carbon dioxide (CO2) by decrease of a fuel consumption rate. 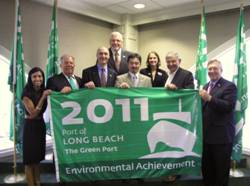 "K" Line has been aggressively participating in this program since 2005 and achieved high compliance record every year with this being its 7th consecutive award, achieving status as the number one company having 100% compliance at the 40 mile limit with the greatest number of ships.

The "K" Line group positively continues to participate in worldwide environmental conservation and contributes to marine and global environmental protection.