The Long Beach Board Port Authority announced top ocean carriers in compliance with its voluntary ship speed reduction program in designated offshore waters for the purpose of reducing exhaust gas from their vessels as "Green Flag" commendation ocean carriers in 2010. 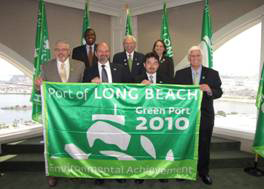 Authority has been campaigning to reduce vessel speed in the Long Beach Port area since 2005 through this voluntary program for ocean carriers. "K" Line has been aggressively participating in this campaign and achieved high compliance record every year with this being its 6th consecutive "Green Flag" award.

The "K" Line Group is making every possible effort to successfully implement its own environmental program, as well as cooperate with any other environmental preservation objectives being introduced by other parties, and will continue to actively contribute to protection of the global environment.